Our good friends at Seven-Six Apparel have pumped out some really unique #RBU and Rose Bowl tees.  You can use the code TENOFF for 10% off your entire order when you buy two or more shirts!  They also have the Revenge Tour and Keep Chopping tee's still  available! 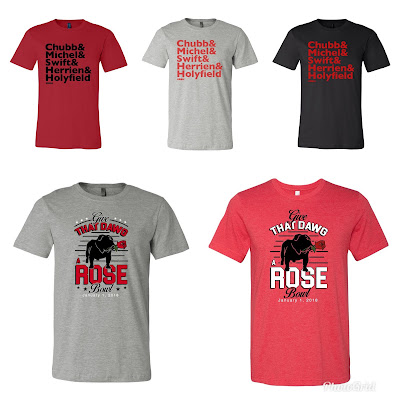 DAWGS
Posted by sUGArdaddy at 2:28 PM No comments:

Let me wipe away the tears…

It was a magical night.  The place is palatial.  And it was worse than bonkers.  I thought we had over 60% of the crowd once we got in there.  And we were just much louder, even early on.  Walking around and looking at fans before the game, I just thought to myself, “They don’t want it like we do.”  You could see it on their face.  They just won a natty 7 years ago…not 37.  That made a difference in the crowd, I think.

Game notes:
·       Jake was phenomenal.  He’s going to be amazing.  He can make a lot more throws than you think he can.
·       The lines were the difference.  We got continual penetration, and protected well after the first drive.
·       Chaney called the best game of his tenure, I thought.  Just everything worked.  The pass to Nauta HAD to be called on first down.  All of it was brilliant, and the incomplete pass on 3rd before their substitution penalty was a great call.
·       Bellamy causes a fumble.  Zo causes a fumble.  In the biggest games, they’ve made plays.  I thought Zo was quietly dominant.  He was chasing guys all night.  He didn’t necessarily make the play, but he was causing havoc.
·       We got Nick to the 2nd level.  His 77 yards were hugely important, and he ran plum angry.
·       We won the game for many reasons, but the bottom line is at this point in the season, we proved to be much, much deeper.
·       The bottom line is that team lost 3 games.  They played some great teams.  I don’t know what their future is.  I remain skeptical of Gus.  It’s like after we played them, we had them totally figured out.  I don’t think we win by 21 if Kerryon plays, but I think we win.  Holland and Kerryon are junors and probably gone.  Stidham is eligible for the draft.  Dude is 6’3”.  I’d draft him.  I think he can sling it.

Tournament of Roses Edition:
·       Clemson’s QB played at my high school rival.  I’ll need a sedative if we play them.  Me not likey.  I don’t like anything from Wren High School.  Anything.  Have I mentioned I don’t care for Clemson?
·       It will be 75 years to the day when we play in the Rose Bowl since Sinkwich and Trippi trod there.  Interestingly, Sinkwich had a bum ankle that game and the freshman Trippi carried the day.
·       I love Kirby.  I think we’re playing with house money right now.  I think we’re going to be back often in the next decade.  It’s possible we’re a little star struck when we get to L.A.  But, right now he hasn’t done anything Richt didn’t do.  Richt finished 3rd in final ballot of the season before the bowls.  We’d have played #2 Ohio State in the playoffs had they been around.  The man was incredibly unlucky.  We played in SECCG 3 out of his first 5 years.  I contend that a lot of that had to do with extreme consistency at the QB position for 5 years.  We should have that the next 3-5 years.
·       It was raining all week before an SECCG we were playing indoors.  We play a semifinal in warm California and have a month to prepare in chilly Georgia.  Think that indoor is important now, Greg?  I do think the way Kirby has structured practices in the indoor has helped us.  I also think McGarity is mostly a goober.
·       I don’t think Clemson can beat Bama.  Best point on that game I heard all day was from Jesse Palmer.  It took 2 other-worldly performances by Deshaun Watson to make those games close the last 2 years.  Do we think Kelly Bryant is capable of that?  I don’t.  Make him throw and I think they’ll lose.
·       We’re going to get new unis with the pretty silver/diamond swoosh!  Yay, uniform nerds!
·       Defensive notes.  Thought Marcus Spears was dead on when he said that we have to be delighted to not have to cover a jet sweep.  We get to play a traditional air it out team.  We’re going to be able to pin our ears back.  Aaaaaaand…we won’t have an SEC crew, so they might call holding.  Seriously.  The Sooners might not hold and if they do it might get called.  I think there is potential for Bellamy, Walker and Zo to have a day.  Will we spy Ro on Mayfield?

Is it really still 4 weeks away?

Gracious.  That’s a long time to smile.
Posted by sUGArdaddy at 7:44 AM No comments:

Check out these 2017 Revenge Tour Tees from our friends at Seven-Six Apparel Co. 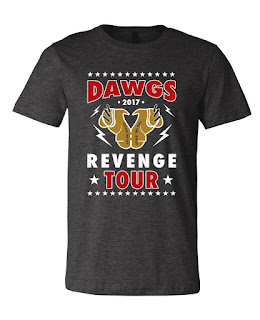 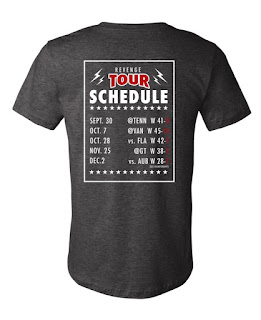 Posted by sUGArdaddy at 7:41 AM No comments: