I don’t know about you, but I’m in full recovery mode.  Like, I feel like I played the game.  The only other time I remember feeling like this is after the ’07 Florida game.  I’m whipped.

And then there’s the program.  We must now recover.  And we are.  I never felt like we were collapsed.  I didn’t really feel like we got outcoached.  I could nit-pick play-calling.  Listen, this game has gotten simpler and simpler to me.  If you can’t block ‘em, you can’t win.  We were searching for answers.  The reason we recruited Fields so hard is a mobile QB is the answer to the unanswerable question:  How do you beat a team you can’t block?  You have a QB they can’t tackle.  We’re all on team Fromm for 3 more years, as well we should be, but Kirby is covering all the angles to try and build a program.

We worked some year 2 magic, but it’s much more like Saban’s year 2.  They became a monster, but they couldn’t beat the other monster, Florida & Meyer & Tebow.  It took them till year 3.  They got better in year 3.  So will we.  And we’ll be way better in year 4.

We’re not going anywhere.  The bummer of it all is that it’s hard to win that semi, and it’s hard to win the SEC.  We have to win 2 slobber-knockers to get there, and then we had to play a team that didn’t win OUR league.  I’m bitter about that, but I know they were the best team and deserved to be there.  It’s just frustrating.  I’d like to see us get in at 11-1 one day, then I’ll be quiet.  What I don’t like about it is that it’s a beauty pageant.  I don’t know if Bama was better than OSU.  I know OU, UGA and Bama all looked pretty evenly matched and OU beat OSU, but that means nothing.  What I know is that winning the SEC means so much because you win it on the field.  You earn your way in.

The bottom line is they had a whole lot more better players, and that made a difference as the game went on:

·       JK Scott is a weapon of immeasurable proportions.  His ability to land that ball high and at the goal line in the corner, where you can’t down it, is incredible.  Plus, they have so many athletes that can cover kicks they keep you pinned deep.
·       The move to Tua was the riskiest move I’ve ever seen in a title game.  That’s why you recruit.  And it might have been a panic move, but it was calculated.  Saban knew Kirby was going to lock down the run game and Hurts wasn’t going to get by #3 much.
·       Ben Cleveland has some work to do, but he’s been a huge part of our success.  We saw what a dominant D-line looks like.
·       We have Roquan.  They have 3 of him.
·       The difference was simply this:  We have 1 player who MIGHT start in their secondary (18) and another (20) who might sniff playing time.  Dom and Parrish would be on the Kickoff team and Aaron Davis wouldn’t be on the team in Tuscaloosa.  Their secondary is something to watch.  No one is open, like, ever.  They bat the ball away so incredibly.  They play tight.  They’re huge.

Saban has better players.  That’s what this thing is all about, man.  Yes, you can make a great or stupid decision that wins or loses a game.  Yes, if you can recruit but can’t gameplan, you’ll be fired (see:  Jones, Butch).  But, the more players you get, there smarter you start looking.

Bama has been ranked #1 in composite rankings for all of 2013-2017, meaning every player on their team was part of a #1 recruiting class.  Our average ranking for that time period is #7.  We had some special kids in that bunch, for sure.  We also had a bunch that haven’t panned out and we’ve still got a few holes on the team.

Bigger and better things to come.

Boys, are you still pinching yourself?

I really do feel like I’m living in a dream.  Ben will get to hear my sermon on Sunday, but I can’t promise it’ll be my best.  Thank the Lord I had the foresight to write it shortly after Christmas.  I finally got to watch the whole Rose Bowl and the first half of the Sugar.  A few Rose thoughts:

·       I’ve been to 3 Sugar Bowls, 2 in NOLA and the one in the ATL.  The Rose is epic.  I’d imagine the Sugar is pretty good as a playoff site, too.  But it was epic.  Everything.  The parade, the stadium, the field, the flyover.  Just epic.  Then the game happens.  I do believe that field and the scene pulls the best out of the kids.
·       A million unsung heroes in the game.  My favorites are the 3 WRs in the game on the winning play:  Crumpton, Simmons & Blount.  Those were literally our 3 WRs on the biggest play in UGA history since we carried Vince off the field in the Superdome.  Their job is to block.  They did it.  If I’ve learned anything from Kirby, it is THIS belief and system of getting players to buy in.  Richt believed that (see his reaction to Richard Samuel at Mizzou in 2012), but I’m not sure he could get 85 guys to do it.
·       Our D settled in.  That offense is no freaking joke.  I’ve heard Kirby talk about facing Manziel.  Sometimes you just get in a match like that.  I’m not sure any other team in the country could have beaten OU but us that night.  I really believe that.  They might not have scored 48 on Bama or Clemson, but they’d have scored enough and I don’t think their offenses could have kept up.
·       Chase had sent me the video of Sony’s wild dawg score against the Cocks, but it was a designed run up the middle that he bounced to the outside.  I looked at Chubb’s vs. Miss St. and the one to tie the game at the end of regulation.  They both went opposite Jake.  Sony ran to Jake’s side.  Why does that matter?  One, it was a great call.  If you watch the play, OU lines up 6 to the other side and 5 to Jake’s side.  They were even literally leaning the other way as the ball was snapped.  Essentially, if Nauta could hook the end, everyone was blocked.  Tyler Simmons did a phenomenal job of not getting a holding call by releasing as his guy fought toward Sony.  Sony shook the tackle and was off.  Two, for Monday, do we see a play where Sony/Nick pitch it back to Jake for a TD to the weak side?  If you see us with a similar set, but say, Godwin, is in there with 2 blocking WRs…look out.  Or, I know Stanley is suspended and would usually be in there, but did we put Crump in there as a guy w/ speed to show the look?
·       From :06 in the 2nd QTR, Kirby coached actual circles around Lincoln Riley.  BTW, I like a coach w/ emotion, but I really like Kirby’s.  He doesn’t get riled up about TDs in the middle of the game.  Riley was all over the place jumping up and down.  Kirby has gotten excited 3 times this season:  Bellamy’s strip in South Bend, Swift’s TD in the Benz, and Sony’s run.  Huge, game-clinching plays.  Don’t celebrate a TD in the 2nd QTR…they mean nothing.


·       My brother commented how good their kicker and punter were.  Kept them back up all night.  The kicker missed a chip shot FG, though.
·       Just don’t turn it over.  Simply.  Don’t.  They’ll score on it if we do.  Jake needs to play very, very smart.
·       They have better players, across the board, but it’s not by much.  We have so many better, front-line players, I think it’s a wash.
·       The biggest advantage is they have numbers on their helmets and they’re Bama…and we have to decide we don’t care.

Final ideas:
·       After some time to digest it, I’m glad it’s not Clemson.  I hate them, and I’d be sick thinking about losing to them.  Moreover, we’ve got to climb that Bama mountain.  Had they beaten Auburn, we might not even be here.  We might have lost to them in the Benz.  I feel much more confident now that I would have then.
·       After getting here, I’m not sure how to tell this to some fans of, say, a South Carolina, but…they’re never going to get here.  It’s so freaking hard to get here.  You have to do so much.  You have to win so many games and beat so many good teams.  If we can pull this off, our last 4 games will be wins over Tech, Auburn, OU and Bama.  Whew.  You have to be really good and have a bunch of really good players and have really good coaches.  This season has taught me that middling programs that dream of a national title have a loooooooong way to go to get there.  It’s hard enough for the blue bloods.
·       Quick Trivia:  Did you know Kirby Smart is 3-1 vs. Top 10 teams?

There’s one thing left, well, two, that this senior class hasn’t done they can do on one night in the same game:  win the natty and beat Bama.

Our friends over at The Seven-Six Apparel Co. have come out with some awesome Rose Bowl victory tees.  Check them out.  Always have free shipping and use code TENOFF for 10% off the entire order of two or more! 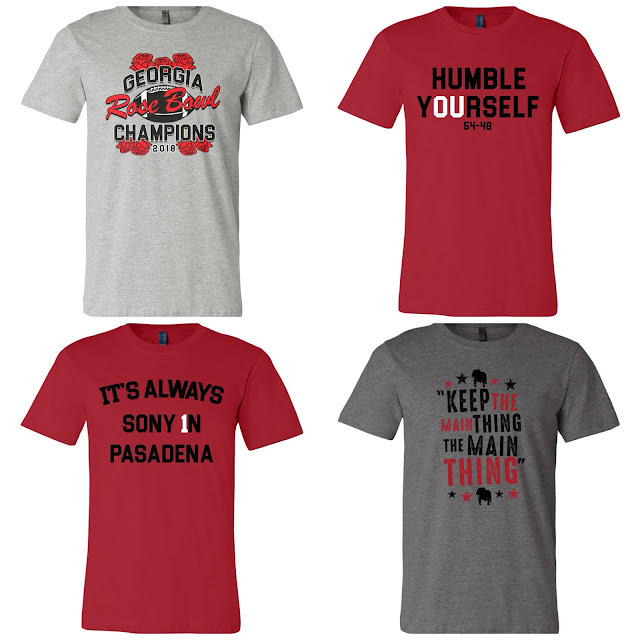 Posted by sUGArdaddy at 3:31 PM No comments: